Home Arts Festivals & Events How to Celebrate a 150th Anniversary

A 150th anniversary can be awkward. It’s certainly awkward to say: sesquicentennial. For the French, maybe a word with as many s’s and q’s flows off the tongue with eloquence. But for the rest of us? It’s a linguistic trip hazard.

Even without someone to give a gift to, the occasion is mysterious. The 150th is much more midway, more in-between time than the centennial or bicentennial. But as is the case for marriages and birthdays, the anniversary of a city’s founding is often cause for introspection, a time to think back to beginnings, to middles and, perhaps with greater imagination—and trepidation—to futures.

Colorado Springs was no exception in this regard 50 years ago when the city was coming up on its 100th anniversary. A week of festivities had been planned, beginning on Friday, July 7, 1972, when things were kicked off by a master of ceremonies who blew a whistle and started the downtown parade. A week later, things wrapped up with a gala performance of The Century Force, a play that the city had commissioned to be written for the centennial and billed as “a sort of epic of Colorado Springs history, going all the way back to creation.”

Yes, Adam and Eve feature in the play. As do, of course, General Palmer, the Antlers Hilton and Spencer Penrose.

And yes, it was weird.

Between the parade and the stage production, the action was pretty much nonstop. There were fashion shows, rodeos, an air show and a historical lecture by Marshall Sprague, the Colorado writer perhaps best known locally for his book Newport in the Rockies: The Life and Good Times of Colorado Springs. There was something for everyone.

On Tejon Street, an exhibition of “futuristic food” consisting mainly of nourishment that had been pulverized and was thus ingestible through a straw, as would doubtless be necessary in the gravity-free future that awaited in the then-far-off date of 2021. Looking back now, they were clearly a little off on the spacefood front, but considering that the current Governor and other State Representatives recently made a pilgrimage to Washington to advocate for Space Command staying in the Springs, those centennial celebrators might have known something the rest of the city didn’t.

With the local economy in the ’70s buoyed by Fort Carson and the Air Force Academy, the military was center stage for the 100th anniversary festivities, and it must have seemed apt for their retrospective to be called “Century Force.” The city was all about innovation, particularly of the technical sort. School District 11 was the biggest in the city. El Paso Community College (now PPCC) was on the move. The newly opened campus of UCCS had an enrollment of about 2,500 students. And a gift from Deputy Secretary of Defense David Packard—the second half of Hewlett Packard—had just made possible the construction of Packard Hall at Colorado College, which had just adopted something called “The Colorado College Plan”—later The Block Plan—a late-’60s educational experiment in which students took one (and only one!) class at a time in compressed three and a half week “blocks.”

There was also a lot of nostalgia for the previous century, including a citywide “Beard Proclamation” put forth by the Colorado Springs Centennial Dukes who were “interested in doing their utmost to make our Centennial Celebration the greatest ever held in this part of the country.” This involved an attempt to “have the city look as it did 100 years ago, and to reflect the struggles and sacrifices of our forefathers” by requiring the men of the Springs to not shave. As they proclaim in their brochures and in various posters that appeared around town:

“These males shall include all who live or work in the confines of our city as well as a goodly portion of our rural area. They may wear a full beard, mutton chops, Van Dykes, goatees, sideburns, mustache, or any kind of facial foliage they so desire. This hairy growth shall be of such length and luxuriance that it can be readily seen and recognized at eight paces.”

There were even comic subpoenas printed that were to be issued to those who flouted the order, and certificates issued to the men whose facial hair passed muster.

My own beard has never been, shall we say, particularly successful, and I can’t see myself seriously attempting any kind of wholehearted reenactment of those founding fathers’ facial hairs. But why should we? Any sesquicentennial worth its salt should invite reflection on any period it covers.

Personally, I’m feeling the call of 1992, when NAFTA was just being negotiated, AT&T had just released its first video phone, Silence of the Lambs won Best Picture and Reservoir Dogs blew our minds. I’ll be the one in the bandana and acid-washed jeans, obsessing over my car phone. You will tell me to google something, and I won’t have a clue, or even an email address—even in a city looking toward a bright and shining future.

Colorado Springs Then and Now in Photos 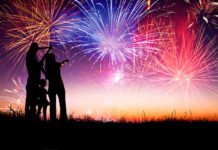 Where to Find 4th of July Fireworks and Festivals

ABOUT US
SPRINGS is a magazine celebrating the people, places and culture that define Colorado Springs.
FOLLOW US
© Copyright 2017 - Springs Media LLC