Monse Hines stuffs her pupusas with some classic combinations: mozzarella cheese and black beans, for instance, or pinto beans and Pueblo chiles. But what really makes Monse’s Taste of El Salvador special is her gift for bringing disparate things together.

The Old Colorado City business, bearing a rollup garage door and IKEA-grade lighting, is chic enough to have long housed Motif Jazz Club. Yet Monse has also made it homey, with photos of her El Salvador hometown, taken by a friend.

At dinner, Monse’s husband, Tim, might prepare your table, and their 13-year-old daughter might bring your horchata. You’d never know that just beyond the cozy dining room is a kitchen that can pump out 20,000 pupusas a month, fueling a seven-year-old retail operation that serves 50 grocery stores throughout Colorado.

“From having an idea, everything has become …” Monse says, trailing off in wonder. “I don’t know, but I think I’m the biggest pupusa manufacturer in the state.”

Monse, 37, grew up in the El Salvadoran valley town of Chalchuapa, not far from the Guatemala border. Her parents were schoolteachers, and the family lived a farm life. They didn’t own a car until Monse was 13. In her early 20s, she traveled to Germany to learn the language, thinking she could return as an interpreter or embassy worker. Instead, in another unexpected mash-up, the young Salvadoran woman met a U.S. Army man at a German Oktoberfest celebration. They were engaged 12 days later and married about three months after that. Two children followed.

In 2011, the Hineses came to Colorado Springs. During the single month they had to get settled before Tim’s yearlong deployment to Afghanistan, they visited a Whole Foods. In what Monse remembers as the most beautiful store she had ever seen, she literally found the answer to her prayers: a business idea “that could help my husband and that could be flexible enough that I wouldn’t leave my kids alone all day.”

In coming months, with Tim only intermittently available via phone, Monse filled out paperwork, created packaging and labels, built a website, and started a business with help from Tim’s mother and a few new neighbors. On her first day cooking in a commercial kitchen, Monse approached Whole Foods. Within 15 minutes they accepted her pitch to carry curtido, a fermented cabbage salad. To her surprise, they also asked if she could make pupusas, the stuffed corn tortillas that serve as a Salvadoran main course. She could.

Today, her pupusas reign supreme. In addition to providing a steady stream of four varieties to Whole Foods, Natural Grocers, Mountain Mama’s and other stores, Monse and her team regularly fulfill orders for colleges and school district special events. Made-to-order pupusas also form the foundation of the menu at the restaurant, which she and Tim opened in January.

One of the more exotic offerings is the loroco and cheese, which incorporates an edible flower imported from El Salvador. It’s one of the few ingredients that doesn’t come from Colorado. When asked about their painstaking local sourcing, Tim quips, “We chose to work harder instead of smarter.”

But community is no joke to them. Monse credits local support with giving her the energy to grow the business, even during Tim’s deployment and another three-year out-of-state stint. It’s part of the reason why they insist on not rushing customers along, despite a modestly sized dining room; why no meal on the menu tops $11.99, though they could almost certainly charge more; and why the couple has started monthly Spanish language immersion nights and salsa-dancing nights at the restaurant. Each day is another chance to honor both culture and community, and to create some fascinating fusion of both.

“Not everybody gets these opportunities,” Monse says. “So you have to appreciate, take care of and love the opportunity.”

Watch for the potential additions of beer, wine and breakfast.
monsestasteofelsalvador.online 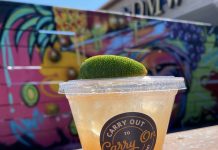