The end of 2017 was dry in Colorado Springs, with no breweries opening after Goat Patch Brewing opened its doors in July. But pints have been pouring at three new breweries in 2018, with two more slated to open in coming months.

Inhabiting the former Triple S Brewing space downtown, veteran-owned Brass Brewing has completely renovated the space and welcomes military and nonmilitary alike. The seven-barrel brew house donates 1 percent of profits to nonprofits that serve veterans, so you can feel good about that extra pint you buy. Looking for something fresh and springy? Try a 5-Jump Chump; the hoppy blonde ale is infused with peach and mango juice. You can take crowlers to go. Food trucks will roll through to provide solid sustenance.
318 E. Colorado Ave., brassbrewing.com

Black Forest’s first brewery opened at the end of March with a Bavarian flair. The space carries beer from other breweries, as well as eating options from German restaurant Schnitzel Fritz. Come with a sweet tooth and taste the Double German Chocolate Cake Stout.
11590 Black Forest Rd., Black Forest, facebook.com/BlackForestBrewingCo

Grab a sandwich to go with your beer when you hit this east-side brewery. Dueces sits next door to Grinder Sandwich Company, just outside the entrance of Peterson Air Force Base. The veteran-owned, intentionally-misspelled brewery’s standouts are the Bloody Pale Ale, an APA made with blood oranges, and the Par 3 Porter, which is easy-drinking despite its dark demeanor.
660 Peterson Rd., dwbbrewery.com

There’s more on the way as another pair of breweries finishes construction, permitting and final details-and eye openings in the next few months.

Set to open in Knob Hill (Circle and Uintah), this latest project from the co-founders of Iron Bird Brewing is expected to offer 14 beers on tap, as well as kombucha and cold brew coffee.
1213 N. Circle Drive, facebook.com/Metric-Brewing-Co-817937851711831

Named for the owners’ ability to discover lost dogs, Lost Friend Brewing is still finishing up construction on the North Academy corridor (between Union and Vickers), and planning to build its menu around eight flagship brews.
2458 Montebello Square Dr., lostfriendbrewing.com

How to Celebrate Mother’s Day in Colorado Springs 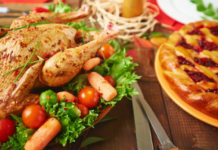 Where to Get Your Thanksgiving Feast To-Go in Colorado Springs