Home Sports Sky Sox: Take Me Out to the Time Machine

In the same year that Theodore Roosevelt ascended to the presidency, professional baseball began in the Pikes Peak region with the Colorado Springs Millionaires. Formed in 1901, the team made its first home at Colorado College’s Washburn Field, sporting a Gold Rush moniker and a can-do attitude until its final season in 1916.

It wasn’t until after World War II that professional baseball returned to the area. An affiliation with the Chicago White Sox—and the Sky Sox brand—began in 1950. The Sox won the Single-A Western League championship in 1958, but the league folded that year.

Thirty years later, owner Dave Elmore brought his Triple-A Pacific Coast League team from Hawaii to begin the second incarnation of the Sky Sox. After five seasons as a Cleveland Indians affiliate, the Colorado Rockies came to life, and the connection that many residents know best began. Since 2014, the team has been a part of the Milwaukee Brewers organization.

This season, the Sox will pay homage to the eclectic history of baseball in town as part of its Cheers to 45 More Years campaign. Opening Day and Friday home games will become time machines for both players and fans. The team and staff will don jerseys and attire from each era. Stadium music will provide historic soundtracks. And promotional elements will highlight past players and dignitaries, and incorporate Colorado Springs history.

“I hear stories of generations of (Sky Sox) fans,” president and general manager Tony Ensor says. “They recount how special the evenings out were. Baseball is a place for people to gather and enjoy time; we want to help create those memories.”

Next year will begin another era of local baseball. A Short Season Rookie-Advanced team will move from Helena, Montana, to Security Service Field as part of the Pioneer League. The season will shrink to June through early September, and the current Triple-A team will head to San Antonio.

Ensor says the switch will allow fans to see and follow the careers of younger up-and-coming players and likely witness more consistent playoff appearances due to a different format. Plus, the team hopes the warmer-weather season will decrease postponed games common to April and May.

“Basically, we get their rookie card every year,” Ensor says. “The players want to make a name for themselves, and I think that newness factor we’ll get every season will turn fans on to the team.”

For now, the 2018 Sox, full of a backlog of major league caliber players for the Brewers, will look to follow up last season’s playoff berth, the franchise’s first in 20 years.

“As good as last year’s team was, we think this year is going to be equal to or even better,” Ensor says. “We expect this to be one of our better teams ever.”

2018
Jim Thome became the first former Sky Sox player to be inducted into the Baseball Hall of Fame. Thome spent parts of the 1991 and 1992 seasons in Colorado Springs.

Promo Days Are Best for Catching a Switchbacks or Vibes Game

And the Winning S’more Is … 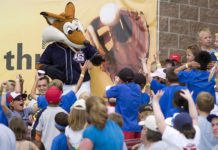 The Boys of Summer Are Back: Sky Sox