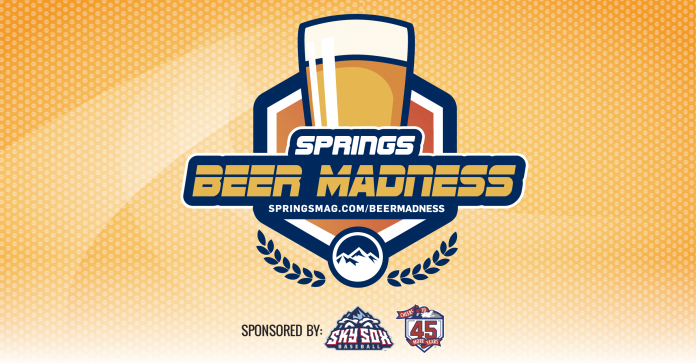 Every year, millions of people love to fill out a March Madness bracket—whether they know anything about college basketball or not. You know, pick a team—based on loyalty, skill, uniform colors or weirdest mascot—and cheer them on to a national championship. There’s a certain joy that comes when your friend or colleague’s March Madness bracket is busted and you’re one step closer to winning the office pool. And while you’re gloating about the upset your team just made, or seeking solace after a major loss, nothing tastes better than an ice cold beer, especially if it’s from a local brewery.

So why not make some madness with the actual beer itself? Welcome to Springs Beer Madness, sponsored by Sky Sox Baseball, where it’s a sudsy, head-to-head (see what we did there?), craft-brew-tasting, bracket-busting mother of all drinking contests. How does it work? Pour yourself a pint and keep reading.

1. Start with the bracket. Making your picks is half the fun, and you’ll find your official Springs Beer Madness Bracket on page 53 of our Winter 2018 issue (or download the bracket HERE). Our field consists of the Sweet 16 breweries in town that you voted in through our online poll. From there, we asked breweries to submit their specific beers, and we seeded the matchups based on Round One vote totals. You’ll find four “regions” of the bracket: IPAs, Darks, Lights and Ales. So it’s similar style versus similar style to begin, then different style matchups in the Final Four.

2. Post the office pool. Drinking alone is no good. Neither is your Beer Madness bracket. So post your picks on the break room wall. Trash talk with your colleagues. Host Tasting Tuesdays or Freethrowdown Fridays to visit the breweries and sample the contenders. Have some fun, people.

3. Get in the tasting game. Never had a Tiny Umbrella or One Ear Naked Saison? Haven’t made it to Smiling Toad or Nano 108? Now’s your chance. It’s always better to be an educated voter, especially when there’s beer involved. Want to know more about your options? Read “Beer Madness Bracketology: The Contenders” for a full rundown of the entire field.

4. Vote! And vote again. It’s up to you to pick the Springs Beer Madness champion! From Feb. 2 to March 15, we’ll host round-by-round voting. It’s simple. Go to springsmag.com/beermadness. You vote—one vote per person, per round. The winning beers advance to the next round. Follow us at facebook.com/springsmag for voting announcements.

5. Join us for the Final Four. The competition heats up, and so does the party. Come on out. Raise a glass. Sample the last four contenders. Then vote your favorite toward becoming the beer champion of Colorado Springs. Get details here at facebook.com/springsmag.

1. If you’re a beer snob with cicerone certification, use your advanced palette to vote. If not, vote by pretty labels or whatever criteria you prefer. This is a fun contest, not an experts-only competition.
2. Get out and try some new brews and breweries. Beer Madness is a perfect excuse to explore the great, local craft brewing scene.
3. Always drink responsibly.

Great Dates for Valentine’s Day, Mardi Gras and Beyond

A Grand Year for Grand Openings in Colorado Springs