Raise a glass to Proper Wines and the Springs entrepreneurs who unexpectedly founded the lauded Washington winery. 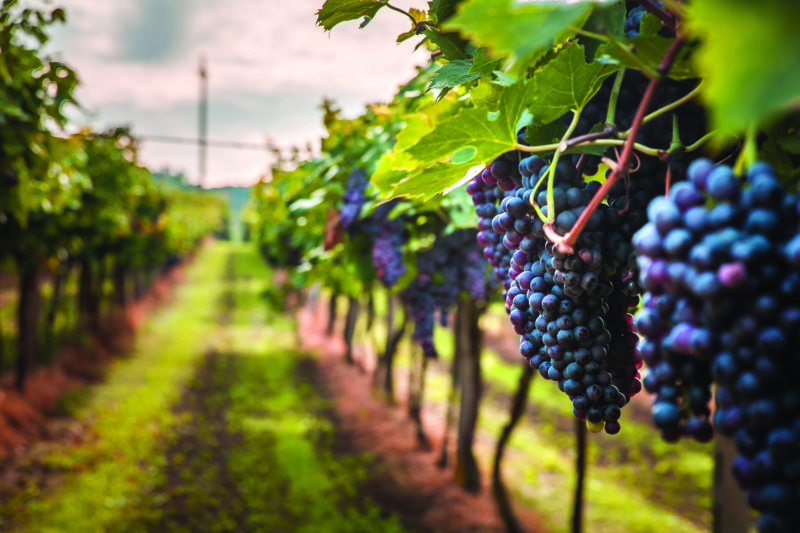 On the face of it, it’s an unlikely undertaking: Two Colorado Springs businessmen purchase an orchard, replant it with grapes and manage the winery from 1,150 miles away. All while holding full-time jobs in Colorado. And kicking off a demanding software startup. And having little practical experience in the industry, besides loving wine.

“Originally, it was a real estate play,” explains Conor McCluskey, who bought the 7.5-acre parcel with business partner David Houle in 2006. “We thought we’d buy the site with the cherry orchard, keep it for 20 years and make a nice little profit.”

Things snowballed, though, as they often do when you have big ideas and the ability to compartmentalize risk.

“I’d done things the wrong way before,” McCluskey says. “So I thought, I’m going to do this one right.”

The whole thing began at a dinner in 2005. Over Saigon Cafe takeout, McCluskey and Houle brainstormed, as they always did on Wednesdays, about possible new business ventures.

At 27, McCluskey already had known a couple careers, including running a construction company that he took to $2 million and back to zero in four years. Lack of experience at running a business and a hunger to go for broke, he says, caused the collapse.

“I went from having a penthouse downtown to living in someone’s basement,” he says.

On that Wednesday, he and Houle were tossing around ideas: Everything, McCluskey says, from selling art on the web to importing Argentine beef. BombBomb, a tech startup for sending video in emails and texts, was in play. So was buying that cherry orchard in Walla Walla, a small town about 10 miles from the Oregon border. (The region pulls in $100 million annually from its 130-some wineries on 2,800 acres.)

They bought the land from a friend, and McCluskey says it was quite a deal. Even so, the young entrepreneurs had to drain their 401ks and take out a loan to pay for it.

Experienced developers soon approached the pair about turning it into a vineyard, rather than just a placeholder for future profit. The plan: Sell the grapes to other winemakers, thus making a little money and creating a name for the vineyard that might later be parlayed into a higher sales price. They named their vineyard Proper for adhering to the earthy, spicy Old World style of syrah.

Somehow, they had become farmers. “When we got the first bill from the developer in 2007, it was three times as much as they told us it was going to be,” McCluskey says. “We said, ‘What the heck did we get ourselves into?’ ”

That didn’t stop them from bottling their own wine in 2009, making 50 cases from about a ton of grapes.

“So, we go into the 2010 harvest, and it’s a record,” McCluskey says. “Everyone is saying this is going to be an epic year for Walla Walla. We decide to use all of our grapes, making 600 cases. At this point, we hadn’t released the 2009 or even tasted it.”

It was a huge risk: The partners had spent hundreds of thousands on Proper, and they were out of money.

Enter investors Billy Adams, Kevin Dibble and David Kunstle, who were all partners in BombBomb, which McCluskey and Houle created about a month after buying the orchard.

Cutting back on operations was a real possibility—until a Washington state wine writer praised the wine.

“The next day my email starts popping up with one order and another order and 10 orders and then 50 orders and 100 orders,” McCluskey says, laughing. “I think we sold 150 cases in 24 hours.”

Later, Robert Parker’s Wine Advocate gave it 94 out of 100 points. “It offers up a wild array of plum, hung game, pepper and lavender that flows to a full-bodied, ethereally textured palate that has knockout richness, awesome freshness and a light, detailed profile that’s oh so easy drinking,” wrote reviewer Jeb Dunnuck. “Utterly captivating … this brilliant Syrah needs to be purchased by the case.”

Later releases have been scored similarly by other success-making authorities like Wine Enthusiast and Wine Spectator magazines.

Proper’s success against the odds isn’t surprising, says Taylor Courey, wine consultant at Coaltrain Wine and Spirits, which has carried Proper syrahs since that first release. “You put quality in the bottle and put it in the right hands, and it often does well.”

The winery is profitable now, McCluskey says. They plant the whole vineyard, producing 1,200 cases in 2016. That release surfaces in stores in Colorado, California, Washington and other states in 2018.

But is McCluskey, now 39 and married with kids, finally a committed winemaker—or just in it for the long-term play?

He pauses for a moment. “It’s a passion project,” he says, thoughtfully. “It’s probably never going to be a Yellow Tail, a highly scalable business. It’s kind of a legacy thing. It grows and it does well, and as long as it continues to do that it’s a nice piece of our lives.”

Where to Find Food Trucks in Colorado Springs