Put them on your 2019 calendar now: 24 of the best annual happenings that every Springs local should go to at least once—if not year after year.

Maybe you’ve lived here for years. Maybe you’re a newcomer to Colorado Springs. Maybe you go every year to (fill in the blank for your favorite). Maybe you’ve always meant to go, but just never made it. No more excuses. Here are 24 of the best annual happenings in the Pikes Peak region that every local should go to at least once—if not year after year. Put ‘em on your calendar now, and we’ll see you there.

Skate in the Park

Acacia Park, through Jan. 21
Lace up your skates, pull on your gloves, and hit the outdoor ice rink downtown. Watch for special events and themes, including Skate with Team USA, Broncos Skate and Ugly Sweater/Funny Hat. New this year: shinny 3v3 hockey.
downtowncs.com/skate

Broadmoor World Arena, Jan. 18 and March 9
It’s one of the top rivalries in college hockey, and you get two chances to see these two archrivals square off in the Battle for the Gold Pan. You know the Tigers and the University of Denver Pioneers will bring their best to the long-running feud.
cctigers.com

Manitou Avenue and Soda Springs Park, March 2
Ain’t no party like a Manitou party. Plan your costume—could be sunny, could be snow—and join the revelry and parade as Manitou puts its spin on Mardi Gras. Take your Cajun style a step further by tasting and voting on chef’s entries in the Mumbo Jumbo Gumbo Cook-Off.
facebook.com/manitou.carnivale

The Antlers Wyndham Hotel, Feb. 1-3
Unleash your inner geek, and enter the local world of cosplay fantasy with pop culture icons, celebrity actors, authors, artists and more from the comic con world. Sure you can get in without a costume, but what’s the fun in that?
galaxyfest.org

Millibo Art Theatre, April 11-28
Experience entertaining and thought-provoking new theater from Colorado-based women through WTF, Millibo’s three-week run of short plays, monologues and performance art. Explorations of the theme “You, Me, Us and Them” will be selected from statewide submissions.
themat.org

La Foret Conference & Retreat Center, May 24-26
The eclectic annual music festival, held over Memorial Day weekend, features performances from more than 20 national, regional and local artists—all in the big yellow tent nestled in the Black Forest pines. But that’s not all! Enjoy yoga, kids’ activities, music workshops and, if you so desire, camping as well.
rockymountainhighway.org/meadowgrass6

Downtown Colorado Springs, May and continuing
For more than two decades, jurors with the city’s Art on the Streets program select about a dozen new pieces of sculpture to install in various spots around downtown for a one-year display. Watch for the new collection to debut in May; then download the app for a mobile guided tour of unique public art.
downtowncs.com/aots

Garden of the Gods, June 15
Here’s your chance for a family-friendly, nighttime bike ride through Garden of the Gods. Ride in costume and illuminate your bike. This year celebrates 25 years of raising funds for the Trails and Open Space Coalition.
trailsandopenspaces.org/newsevents/starlight-spectacular/

Pikes Peak, June 30
The last Sunday in June is Hill Climb day, and has been for nearly 100 years. It’s known as the Race to the Clouds for a reason—high-speed competitors race up the Peak, around 156 turns, to the finish line at 14,115 feet. Don’t miss the practice runs and other festivities of Race Week, including the chance to meet drivers and take in acrobatic motorcycles at Fan Fest in Downtown, June 28.
ppihc.org

Memorial Park, July 4
When the sun goes down on July 4th, the place to be is Memorial Park. Food, fireworks and the Philharmonic. What else can we say? Oh yes, free.
csphilharmonic.org

Norris Penrose Event Center, July 10-13
For four days each July, the Pikes Peak or Bust Rodeo—heading into its 79th year in 2019—is a priority for top talent on the competition cycle. Cheer on bull riders, steer wrestlers, barrel racers—and the always cute mutton busters.
pikespeakorbust.org

Memorial Park, Aug. 31 – Sept. 2
Rise early at least one morning during Memorial Day weekend, head to the park, and enjoy more than 70 hot air balloons as they fill up with air and float above your head. Grab a nap, and head back to the park in the evening for concerts and locals’ favorite balloon glow.
coloradospringslabordayliftoff.com

Rock Ledge Ranch, Sept. 2
First pitch between the Camp Creek Cloud Busters and the 1882 Denver & Rio Grande Reds happens at 1 p.m. each Labor Day. The authentic reenactment plays by vintage rules: No one wears a mitt (except the catcher). Bring a picnic and your favorite team cheers.
rockledgeranch.com

What If … Festival of Innovation & Imagination

Downtown Colorado Springs, Sept. 8
For one Saturday, the What If … Festival takes over six downtown city blocks with more than 100 interactive experiences. You’ll find an eclectic and innovative mix of creativity from the arts, science, engineering, technology and more. As the 10th year of the fest, 2019 is sure to be bigger and more creative than ever.
whatif-festival.org

Fine Arts Center, Oct. 12
OK, so it’s not an annual occurrence, but through the entire year, the FAC will celebrate the centennial of its beginnings as the Broadmoor Art Academy. Mark your calendar now to attend what’s sure to be a birthday party to top all birthday parties. While you’re at it, make plans for an extra-special Annual Gala on Sept. 7.
csfineartscenter.org/100-years

Downtown Manitou Springs, Oct. 26
Manitou resident Emma Crawford died in 1891. She was buried at the top of Red Mountain, and in 1929, her coffin came sliding down the mountainside. Since 1995, Manitou has honored her memory by racing coffins through town. Costume up to race or cheer on the competitors.
emmacrawfordfestival.com

Falcon Stadium, Nov. 2
Each year, the Air Force Falcons get to battle either either Army or Navy at home with the Commander in Chief’s Trophy on the line for service academy supremacy. This year the Army Black Knights pay a visit. You can always expect a full show of force from Air Force—on the field and with an impressive full array of aircraft flyovers.
goairforcefalcons.com

Colorado College, Nov. 8-10
It’s the longest-running women’s film festival in North America, and RMWFF has featured films honoring “the female lens” for more than 30 years. It typically sells out doing so. Events open with a gala and include filmmaker discussions along with a full schedule of film screenings.
rmwfilminstitute.org

Downtown Colorado Springs, Dec. 7
Bundle up and head Downtown to join 60,000 of your neighbors as you cheer on brightly lit floats, bands and the arrival of Santa Clause right down Tejon Street.
coloradospringsfestivaloflights.com

The ModBo, 17C E. Bijou St., Dec. 6 – Jan. 3
The ModBo gallery covers its walls with more than 500 pieces of art for sale, each less than 24 inches in every dimension. It’s perfect for gift-giving or collecting. If that’s not enough fun for you, the ModBo’s Ho-Ho, a Christmas cabaret for grown-ups mid-month, will knock your socks off.
themodbo.com 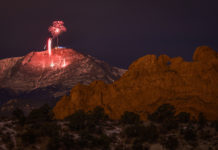