When builders fashioned a typical midcentury 2,400-square-foot home in the Broadmoor area in 1957, no one could have envisioned what it would look like six decades later. Today, it’s a striking contemporary space with 360-degree, close-up views of Cheyenne Mountain and Cheyenne Cañon, overlooking the city. Of all the rooms in the 8,700 square-foot modern masterpiece, only one doesn’t have conspicuous windows—the theater room.

As you step into the atrium entry, you’re greeted by the burble of a two-level slate and tile fountain. But it’s the 20-foot peaked glass ceiling that draws you into bountiful light, warmth and the beauty of the mountain surroundings. Soft blue skylights run along the ceilings. A glass-block accent wall curves off the kitchen, and opaque glass doors set off each bedroom. Both features allow some privacy without sacrificing light.

Taking it up a notch, the living room includes floor-to-ceiling glass that opens up the space. Literally. Large glass pocket doors open expansively onto the patio for seamless indoor-outdoor living. Around the corner in the family room, another set of glass doors open the entire wall to the pool. Recent homeowner Jennifer Freezer says her family enjoyed relaxing in the pool while taking in a movie showing on the family room’s retracting projector screen. (The home was just sold with the help of the Becky Gloriod Partners for $2.5 million.)

The original footprint of the home did not include this luxury. Typical of its day, that design divided the house into small rooms. It was expanded in the ’90s, but then gutted and reimagined as a more open-concept architectural marvel in 2013. Now its modern style perfectly complements the surrounding natural beauty.

As the entire layout changed, the original home became one wing of the current house with window-filled rooms and a covered patio. The master suite was moved to one of two upper levels. Today it has floor-to-ceiling windows on adjacent walls, a wrap-around balcony with decorative stone flooring, and a bright bathroom featuring a picturesque soaking tub and a glass steam shower with three shower heads. “It’s the best shower you can possibly take,” Freezer says, confirming what everyone thinks.

The property is also a study of opposites. It’s fenced but open, airy but private. Freezer points out the interesting, mature evergreens lining the property. “The landscaping is very strategic. A pine tree was planted in front of almost every window on the perimeter of the property, so from the outside streets, you can’t see in,” she says. “They really wanted their privacy but still have everything to see.”

From the exterior views to the interior space, there is no shortage of luxury at this address. The 2.7-acre lot includes a tennis and sport court. The workout “suite” includes a sauna—with a glass wall, of course. The kitchen includes every kind of specialty appliance for grilling, freezing, warming, chilling and cooking. Custom living room furniture, including curved built-in seating, provides chic décor. The detached garage includes a half-bath, space for three cars, plus square footage for a workspace or man cave. “The previous owner was a Pikes Peak [race] enthusiast, so he had exotic cars,” Freezer says with a smile. “We park our John Deere tractor in there.” And just one Lotus.

Sometimes a home is limited only by imagination. 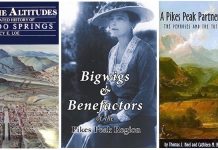