Update: Unfortunately, as of December 2017, COCO Crafted has closed its doors for good. Watch for pop-up events and home parties.

It’s Saturday night at COCO Crafted in downtown Colorado Springs. Two young Denverites have made the drive down I-25 for a unique workshop: Taxidermy 101. Owner Mundi Ross welcomes her guests and then hands them over to instructor Sally Piette, who briefs them on what they are about to do. For the first half hour of the class, I watch with detached curiosity, just here to interview Ross and observe one of the COCO Crafted workshops. Soon, however, Piette hands me a frozen rat and X-Acto knife, insisting that I participate too. I take a deep breath, and gamely say yes.

COCO Crafted is entrepreneur Ross’ newest venture under the Colorado Collective brand. You may have seen Colorado Collective (COCO) magazine in local stores or attended one of their pop-up farm-to-table dinners. “Colorado Collective was birthed three years ago out of the desire to tell stories about creatives, makers and small businesses in our community and beyond,” Ross says. “Part of the vision of COCO was to always have a physical location—we just didn’t know when.”

When the former Mountain Fold Books storefront became available last January, Ross moved forward with COCO Crafted. “It lives out the mission of Colorado Collective in a more tangible way,” she says. “The space is a manifestation of the mission of Colorado Collective to cultivate and support the community of makers and creatives in the area, but also to be a space where anyone can come and learn.”

Creativity has long been a way of life for Ross. When she arrived in Colorado Springs from Oklahoma 14 years ago, she did various jobs including working at a paint-your-own pottery store and teaching art at a school for children with disabilities. She started her own cookie business, Salt + Butter Co., from which evolved the idea of Colorado Collective. She says COCO Crafted brings her journey full circle, emphasizing the therapeutic value of taking the time to create.

COCO Crafted offers a variety of DIY craft kits, as well as workshops for all ages, such as woodworking and brush calligraphy. When asked about her most unusual class, Ross laughs, “The taxidermy workshop is the most popular and the craziest workshop that we have for sure.” According to NPR, taxidermy is experiencing a revival among hipsters with a taste for all things vintage and bizarre.

Back in our own taxidermy workshop, student Bianca Germain is enthusiastic about the process. She’s a former biology major and used to dissecting things, so she is not fazed by the frozen blue jay that she slices down the middle. Her friend Matt Jones is along for the ride and has more success with a frozen rat than the delicate songbird he started with.

After about an hour, the most gruesome part is over. Piette shows us how to rub salt and borax onto the pelts to destroy bacteria, and then how to pick the right amount of stuffing. I have flashbacks to the days when I worked in a costume conservation laboratory at a museum as I begin to sew up my rat with a baseball stitch. We stuff cotton into our creatures and make wire armatures to hold shape.

Piette asks us to give our specimens a backstory, so Germain decides that her blue jay works for the mob. Jones’ rat is dancing at a disco. Mine is a hard-boiled detective named Kant. After posing our animals and securing them to wooden mounts, I ask Jones what they are going to do with their taxidermy creatures. “Well, Bianca’s birthday is pretty much taken care of,” he says with a laugh. 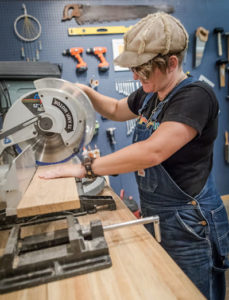 COCO Crafted continues to evolve with expanded hours as of September and a menu of DIY craft kits, such as floating wall shelves, wine glasses, beaded wrap bracelets and more. The concept is perfect for grabbing some friends and making an evening of making something. Ross says a liquor license is in the works. Of course, there will still be classes offering directed opportunities to try your hand at a variety of crafts and trades. And the space is available for event rentals.

Inside the U.S. Olympic and Paralympic Museum

Give the Gift of Local Experience