In 1963, 17 athletes were inducted into the Pro Football Hall of Fame’s inaugural class, including a quarterback from rural Colorado named Earl “Dutch” Clark. Born in 1906 in the prairie town of Fowler, along the Arkansas River, Dutch moved with his family at age 10 to Pueblo, where he eventually attended Central High School. Despite being legally blind, the “Flying Dutchman” was regarded as the best all-around athlete in the state, competing in baseball, basketball, football and track.

Dutch starred as a multisport athlete at Colorado College and was the school’s first to receive All America honors. Football is where he ultimately found a career. During the 1928 CC season, Denver News sports editor Curly Grieve wrote, “The Flying Dutchman … is an extraordinary football genius. But … confoundedly modest – [with] an unselfish attitude.” On top of his punishing ability, Dutch was exceptionally intelligent, strategically utilizing and highlighting the strengths of his teammates.

A remarkable triple threat as a runner, passer and kicker, Dutch played seven seasons in the NFL for the Detroit Lions (originally, the Portsmouth Spartans) between 1931 and 1938. In his final two years, he performed as both player and head coach. He went on to coach the Cleveland Rams, Seattle Bombers, Los Angeles Dons and the University of Detroit Titans  before retiring in 1954 to enter a sales career in Michigan. Dutch returned home in 1975, moving to Cañon City, where he passed away in 1978 at age 71.

7 Seasons Dutch played in the NFL—and his jersey number, the first retired by the Lions.

1933 Dutch’s NFL “gap year,” when he served as head football coach at Colorado School of Mines.

7 Halls of fame to induct Dutch, including Colorado, Colorado Springs, CC and Pueblo.

Now Is the Right Time for Art on the Streets 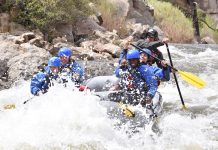