Home Sports Walk with a Doc 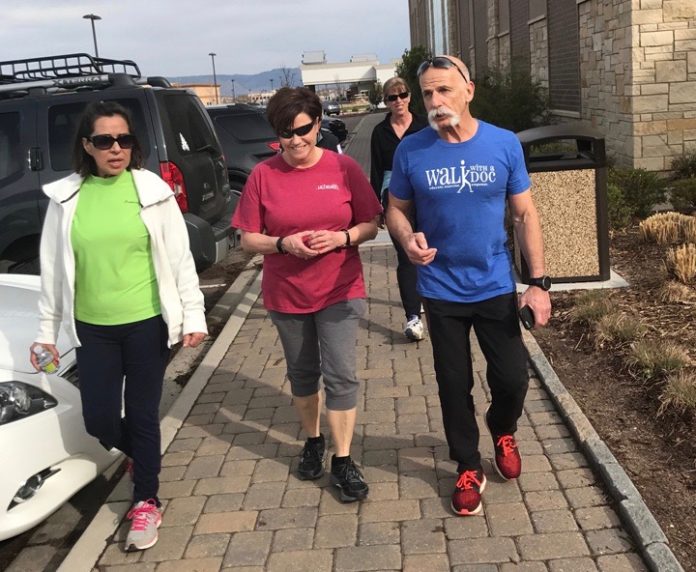 It’s 8:00 on a Sunday morning at the old Zio’s Italian Kitchen parking lot, an unusual time and place to see a doctor. But the trim, mustachioed man leading this small group of walkers and answering health questions is Dr. Larry Cohen, an emergency room doctor with UCHealth at Memorial Hospital and leader of the local Walk With a Doc chapter.

As in each of these regular gatherings, Cohen begins by revealing his personal journey then reviewing a topic relevant to wellness. Today it’s the proliferation of Type 1 and Type 2 diabetes. Walkers of every size, shape and age join together to collectively promote a healthy lifestyle. Some are regulars, some first-timers. And people with personal questions are welcome to pick Cohen’s brain as they walk along the route.

This is Walk With a Doc, part of a national program begun in 2005 by Dr. David Sabgir, a cardiologist in Columbus, Ohio. The mission is to encourage healthy physical activity in people of all ages and reverse the consequences of a sedentary lifestyle.

Cohen joined forces with the national organization in April of this year. He certainly walks the talk—but he didn’t always.

“In the late ’90s I neared 200 pounds, ate a ‘Calorie Rich And Processed-Standard American Diet (CRAP-SAD)’ diet and didn’t have a very healthy lifestyle,” Cohen says. He saw patients just like him enter the ER, but he says vanity drove him to change. “I didn’t want to hit 200 pounds,” he says. “I went to a Mediterranean-style diet—lots of fish, fruits and vegetables, olive oil—and started working out six days a week.”

He lost 50 pounds, and his elevated cholesterol dropped 110 points. After four years, he even began training for triathlons. But his endurance was decreasing, and something seemed wrong five minutes into spin class. “No pain,” he says, “just a feeling of blackness and ‘impending doom.’ It actually terrified me.

An EKG came up normal as the symptoms resolved. But as Cohen continued training, warning signs such as fatigue, chest pain, arm pain and jaw pain returned. He sought a stress test, and triple bypass surgery followed in 2003—four years after he tried to change his life.

It was a turning point. After researching lifestyle medicine, Cohen and his wife began teaching, as volunteers, a health program focused on treating root causes, not just symptoms, of health problems such as obesity, high blood pressure, Type 2 diabetes and heart disease. “In medical school they teach us how to treat disease, not prevent it,” he says.

He also adopted a plant-based nutrition plan and regularly walked, ran and trained for triathlons. “People have the misconception that walking isn’t enough or won’t help them become healthier,” he says. “At least 150 minutes per week of moderate intensity—3 to 4 mph—walking is as beneficial as vigorous exercise.”

Cohen still works as an emergency room physician, but now he emphasizes lifestyle changes and prevention. Through Walk With a Doc, his message and passion continue to grow as more participants show up each week.“The Cohens and I both have a passion to help people improve their lifestyle with exercise and diet,” says regular participant, 76-year-old Mary Smith. “I love all that we offer to those who want health. You are never too old to start. Just start!”

Heart attack symptoms present differently in every person. Considering nearly 2,200 Americans die of cardiovascular disease each day (an average of one death every 40 seconds), many of us have some form of vascular disease, and for some, the first symptom is the last. Against such grim statistics and an age of skyrocketing health care costs, Walk With a Doc connects patients with a doctor on a natural, human level—and a pathway toward a healthier lifestyle.

“I’m frustrated with our society’s poor health. Some of what I see in my ER can be prevented,”Cohen says. “Eat a rainbow. Walk every day. Prevent and reverse heart disease.”

2  Colorado ranks second, following Minnesota, for the lowest annual number of deaths due to cardiovascular diseases, including heart attach and stroke, according to 2016 America’s Health Ranking Annual Report. But…

How to Walk With a Doc

Walks are held Sundays at 8 a.m. at varied locations in Colorado Springs. Snacks, water and coffee are provided. Attend three walks to earn a t-shirt. For details and event listings: facebook.com/walkwithadoccoloradosprings