Our writer experiments with home-cured meats and enters the inner circle as Springs charcuterie experts reveal the heart of their art.

By Claire Swinford
September 21, 2016
If you’ve enjoyed tasting and serving charcuterie at home, here’s a revelation: It’s easy to make your own. Given a good piece of meat, the right kind of salt and enough time, you’ll be able to enjoy a whole new aspect of cured meats by experimenting in your kitchen. Here, three Colorado Springs pros explain what you’ll need to succeed in home-curing pork belly, wild game and more.

Charcuterie, it turns out, is something of a mutual confession society: a secret club of geeks that shuns outsiders but embraces its own. As a journalist inquiring about charcuterie among local professional authorities, I had the repeated experience of conducting a delightful, if superficial conversation about the joys of tasting cured meat that took an abrupt left turn when I mentioned the contents of my refrigerator.

My fridge, I confessed, was a temple to the joys of beneficial bacteria: those ancient methods of cooking and preserving that had their advent long, long before the invention of the compressor coil. Its longest-standing denizens include homemade pickles, sauerkraut and a live sourdough starter affectionately known as Boaty McBoatface. But its newest addition was a two-pound cheesecloth-wrapped bundle of joy that I optimistically called pancetta.

Sure enough, it was fresh side of pork brined in curing salt and dextrose and then air-dried for 57 days, though it was salty enough to defy any form of consumption other than as a seasoning—an effete hipster form of bacon bits. But the minute I mentioned my project to my interviewee chefs, the whole tenor of the conversation changed.

Chef Mark Henry leaned in, dwarfing the cafe table between us. Chef Jay Gust set down the bar towel he’d been using to wipe sauce smears from the edge of a dish. Chef Kevin Campbell took his phone to a different room, away from the noise of the kids and the dogs. And then they got down to brass tacks.

“Where did you get your meat?” they wanted to know. “What kind of salt? What kind of spices? Did you use the Bible?”

“The Bible” is a gorgeous tome called Charcuterie: The Craft of Salting, Smoking and Curing, named by co-authors Michael Ruhlman and Brian Polcyn in 2005 when the culinary genre was still a novelty among American home chefs. It has aged extremely well and is worth every penny of the $20 you will spend to buy it used on Amazon.com.

Ultimately, though, charcuterie doesn’t depend so much on recipes as it does on the attentiveness of the charcutier. As Ruhlman and Polcyn point out, pâté is not something you whip up between running errands and picking up the kids from soccer practice. It requires beautiful ingredients, well-prepared. It requires time. And, as I learned with my pancetta, it requires a great deal of trial and error.

Campbell explains: “My master, François [Vecchio, of Columbus Salame Company in San Francisco], he said, ‘We don’t make salami. Microbes, yeasts, microorganisms, they make the salami.’ We just drive the bus, so to speak. We can control the environment and speed things up and slow things down at certain parts of the aging process. You check on the salami every day; it’s like your little baby. You look at it; you smell it; you touch it; you feel it; and you adjust the temperature or humidity according to what it needs.”

If this sounds like a lot of effort for something you could probably pick up at Whole Foods in 20 minutes, think again. The product of home curing is delicious enough to warrant the obsessive process.

Gust, who has been making dry-cured prosciuttos and hams for almost 20 years, laments the extended aging process that gives them their distinctive mouthfeel also makes them almost impossible to make for his restaurant patrons. “I would love to get really aggressive into air-curing, making all of our own prosciuttos in-house, but then you’re talking major storage, major keeping up on it. Let’s say we go through about one leg of Serrano a week here, and it takes about a year to make a Serrano. So we would have to have 52 to 56 legs in a cooler, and you can’t have them crowded, so you’re talking about an entire walk-in just for Serrano.”

An avid butcher and wild game hunter, Henry knows Gust’s struggle a little too well. “You should see my garage,” he says. “We’ve got meat in low places—you know that song by Garth Brooks? I’ve got meat everywhere. Any piece of meat that I harvest, or is harvested for me, we use all of it.”

To Henry, though, that’s not necessarily a bad thing. In fact, he encourages home cooks who fall in love with charcuterie to try curing for themselves. When I fessed up to my fridge-pancetta experiment, Henry couldn’t contain his enthusiasm.

“You look at something like prosciutto, and it’s been instilled in us to put it on this pedestal, like this is something that takes forever and is such a special product,” Henry says. He lowers his voice to a whisper and says it’s so easy to make. “But nobody realizes. Once you start to break that wall down, it’s like, man, somebody tie her down, because she’s off to the races. There’s going to be meat hanging from your ceiling fan in the living room.”

For more guidance on home charcuterie, refer to Charcuterie by Ruhlman and Polcyn, the pancetta recipe in Alice Waters’ Chez Panisse Cafe Cookbook, and the “Salumi, Charcuterie, Wurst” group on Facebook. 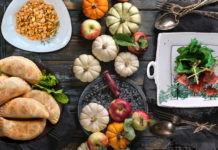 3 Holiday Recipes Guaranteed to Make You the Life of the...