Get ready to raise a glass to Colorado Springs—a glass of very fine bourbon. To commemorate the city’s 150th birthday, Axe and the Oak Distillery is releasing The First Stake Bourbon. The limited edition, cask strength bourbon whiskey was created in partnership with the City. Mayor Suthers even lent a hand in the distilling process. And the beautiful label features a historic photo of surveyors near Cascade and Pikes Peak avenues, where local leaders drove the first iron stake into the ground and declared a new city on July 31, 1871.

We joined Axe and the Oak founder Casey Ross at the company’s Whiskey House in Ivywild School to sample The First Stake Bourbon. As a Colorado Springs native with deep roots in the Pikes Peak region—Ross’ great-great-great-grandfather, Levi Welty, named the town of Cripple Creek—Ross is a perfect pick to distill such a milestone spirit. Get to know him a bit in these highlights from our conversation as we talked historic bourbon, starting Axe and the Oak, Colorado Springs and building stages for the world’s biggest rock stars.

Springs: How did the First Stake Bourbon project get started? Was this your idea?

Casey Ross: Honestly, this was the City’s idea and, we were just humbled and honored to do it.

I understand Mayor John Suthers lent a hand in the distilling. Did he know his way around the distillery?

Not quite, but he did an awesome job that day. Mayor Suthers helped us with a cook we were doing for The First Stake.

So tell us about the distilling process for The First Stake.

Our bourbon consists of corn, rye and barley, and then we slap it into a barrel for aging. So we have a good corn content, which is going to give a lot of your sweet characteristics, and it’s just amazing what the barrel does to a spirit. The rye is going to add that spice, and that malt barley is going to kind of smooth things out a little bit. So, it’s always a fun process, that distillation process. Then we get to blend with some of our other whiskeys, and we’ve come up with something pretty special for the city.

It’s cask strength, so it’s going to come out at 114 proof. It starts high, and if you like to add ice cubes or water or however you like your whiskey, you can tone it down to wherever you want it.

It’s surprisingly smooth and balanced for being that strong.

We really worked hard on getting it just right. It’s 114 proof, but when you pull it in, it doesn’t come off like a punch in your face, cask strength bourbon. It’s more like 100 proof or less. Our general flagship bourbon, our 3 year bourbon, is 92 proof. And [The First Stake’s flavor profile] is not far off from that. It’s a very, very smooth bourbon. You get that really creamy, buttery smooth start. It has that little spice on the tongue, but then the heat just kind of dissipates.

We knew grandmas, grandpas, everybody is going to be buying this bottle. Some people aren’t going to open the bottle. Those will just be on the shelf for the rest of the life, which is fine. But we want people from all walks of life to enjoy it. So we want it to be very drinkable.

How can people get their own bottles?

It releases on June 12 [timed with the City’s Beards, Bonnets & Brews Festival]. We’re doing pre-sales now, and we’re going to be selling them out of the Whiskey House. We’re only going to do between 1,000 to 2,000 bottles for just the city of Colorado Springs. In the future, we’ll tweak a few things, and we’ll probably use this as our running cask strength bourbon for Axe and the Oak.

Let’s shift gears a bit. Why do you do what you do?

It was honestly just having fun with friends. That’s how it all started. It’s funny because I’ve never been a big drinker. It was really legitimately barbecuing with my buddies, and we started making beer, and we started talking, and, ‘Oh, well, we could probably do that.’”

I love working with my hands. It’s a big, big part of my life. And the craft side of making the whiskey—I was like, this is pretty cool. I really like building, the equipment, the cooking, the grain, that distillation process, which was trial and error the whole way through. We had no idea what we were doing at the beginning.

How did Axe and the Oak get started?

Jason Jackson was playing music at Flying Horse one night and drinking Maker’s Mark or Knob Creek, and he was like, “Gosh, this is good. I bet I can make this.” I was in the entertainment industry, working in theater and rock and roll. I’d be on the road for three months and then come home for a couple of weeks at a time. We’d make beer and have a barbecue. And then we just started fiddling with all sorts of things, and it kind of escalated.

I really wanted to get off of the road, so I started a fabrication company. My background is automotive. So I was going to do street rods, race cars, motorcycles, custom furniture, just everything custom. We kept experimenting with beer. Then when we got our license, we had between 80 and 100 bourbon recipes, different mash bills and everything. We had a big campfire in my backyard and had a bunch of buddies over to blind taste it all. Everyone loved the 92 proof, so we haven’t strayed from the 92 since we started.

That’s how we got going. It’s based on friends and music and having a good time with buddies. And, honestly, it was just going to be a hobby for us—just kind of a side gig.

If you could go back to the beginning—Axe and the Oak opened in 2013—and tell yourself one thing, what would that be?

I would tell myself it’s really hard to start a micro-distillery full-on making your own juice. We love bourbon, so we started with bourbon. Bourbon takes a long time, a very long time. I know hindsight is 20/20—but, oh my gosh, how many things would I do differently? There’d be quite a few, but we would’ve started with a white spirit, a moonshine or a vodka or a gin just to get it to market

And we would have started rectifying [or blending] right out of the gate. So we would have started sourcing. We’ve been in business for eight years now. The first four and a half years, we made all of our own juice. And then we tripled production. We quadrupled sales. We started depleting all of our barrels. And we got to the point where we were like, “Hey, we’re going to have to either close our doors or feed our family.” So we started rectifying, bringing in a source product—we use MGP out of Indiana. It’s fantastic. So we blended MGP with our own juice. A lot of these distilleries start out rectifying, which is the smart thing to do from a business standpoint.

So that’s how I would have done it —completely different. But that being said, it has worked. We’re buying a system right now that will quadruple our current production. We’ll put away roughly 750 barrels a year, which is still a small amount compared to a lot of these guys. But our goal is to use our own product for the state of Colorado, and we’ll blend for the other states.

What else is on the horizon for Axe and the Oak?

We’re planning on moving. We’re currently in a 4,000 square foot facility; we’re looking for facilities between 10,000 and 15,000 square feet for the new distillation system so we can sock away the barrels and keep our own juice flowing. And we’re growing. Currently, we’re in Colorado, Texas, Arkansas, and we’re licensed in 13 other states. So we’re growing little by little and as organically as possible.

What do you love most about Colorado Springs?

I was born at Memorial Hospital. I went to Bates for elementary school, Horace Mann for junior high. I graduated from Wasson High School. I’ve traveled the world, and I’m back, and it’s just really cool to be here. I guess my favorite thing now—the people are great for sure.

I love having the mountains in our backyard. I live downtown, and I can be on singletrack 12 minutes from my front porch. And I’m really excited for where the Springs is currently. All the food’s been incredible. The drinks are incredible. There are a lot of fun things the city is doing with the Switchbacks. It’s been nice seeing it turn that corner and see or hear about people making the trip from Denver to have dinner. We get people in the Whiskey House all the time who say, “Oh yeah, I just drove down from Fort Collins.” It’s so neat.

What’s one thing you would like to see change about Colorado Springs?

I think probably the cycling. You can cycle all over the Springs, but sometimes it’s not very safe. Some of these cities that are the same size as us have these epic mountain bike and road bike trails everywhere, and it’s very easy to get around. The way Colorado Springs is right now with traffic and roads, it’s not catered very well for the cyclist. That’s just a personal thing because I’m a cyclist.

What’s an unexpected or little known fact about you?

I’m a gear-head through and through. I’m building my car right now for the Bonneville Salt Flats. I’m big into racing. I love mountain biking. And I was a roadie for 13 years, so I got to do some pretty cool things and see some cool places.

You have to tell us more about that. Who were you a roadie for?

I was in theater, so my first one was Bob the Builder’s big theater show, and then one with dinosaurs. Then I was a production stage manager for Batman’s world tour. Batman was my boss for two and a half years. I did the U.S., Europe, U.K. and South America with Batman. And then I was a project manager for Stageco, the largest black steel, rock and roll company in the world. They’re based in Belgium, and their U.S. headquarters is in Black Forest, of all places. I started my fabrication company; then they hired me as a project manager. So I built stages for Metallica, Paul McCartney, all the big stuff. I’d fly out and do site advances and stuff. We did WrestleMania. We did silly stuff. U2’s the Claw, that big monstrosity, was Stageco. We built some pretty cool stages over the years.

So if you could sit down and share a glass of Axe and the Oak whiskey with anyone in the world, who would it be?

Dolly Parton. I don’t even know if she drinks, but she’s just an amazing person.

Whether you want to raise a glass in honor of Olympic City USA or age a bottle of The First Stake Bourbon in your collection, you can order it at axeandtheoak.com.

Where the Spirits Lead on the Colorado Spirits Trail

Deals and Drinks With Crafts and Drafts Passport 2021 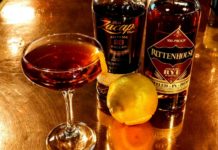 Where to Celebrate Oktoberfest 2021 in Colorado